This is the ideal place to make a base for visiting both Ravello and Amalfi, Sorrento, Pompeii and the beautiful Capri. It is not just a matter of geographic location which places it in the middle of all the beauty of the region, but also the fact that it appears to be the country that still retains in itself tradition, hospitality and the characteristic features of the fishing village it once was.

From Piazza dei Mulini until the Spiaggia Grande, from where boats leave for all major destinations, the perception can only be that of being in the commercial heart of the country. Colorful clothes out of the boutiques that sell clothes for the sea and beyond, small terraces and cafes shaded by pergolas of lemons, waiters who prepare the tables and do not spare the smiles to passersby: well, this is the center, but the hospitality . The Spiaggia Grande is the most frequented area of bathers and visitors, but just sneak in one of the boats that ply to other beaches and one day you pass it in Fornillo (also within walking distance with a romantic walk), another from Adolfo or Le Sirene conclude perhaps at Arienzo (the beach at the foot of the villa that was the Franco Zeffirelli) director; in short, there is something for all tastes and needs. By mills, continuing into the road rolling stock management Sponda, you can look on pyramid of Positano in the standard way that can be done. Thousands pictures that are taken every day from that side of the country, who can not go home without a photo taken from there, and at the same time can continue the tour in the shops of artisans of pottery and jewelry.

The Hamlets: Montepertuso and Nocelle

The village of Montepertuso, remained still rural area, named after the “Pertuso” (in Italian “hole”), that is, natural arch that dominates the houses. The “hole” is open to visitors with a little walk and is truly an exceptional place on the occasion of Santa Maria delle Grazie on July, 2nd when the Pertuso become the theater of representation of the legend of the Devil and the Virgin Mary, with a fireworks display second to none. The village has restaurants that deal with local cuisine and offer a shuttle service for its customers.

To reach the other fraction, Nocelle, you must pass Montepertuso continue for about another kilometer. The carriage road reached the area for a little over 15 years. This situation, while “slowing down” the development, has helped to give the place a chance to support change slowly leaving him almost completely untouched and even, in some respects, genuine like 40 years ago. From here you can see the whole coast to Capri, and in late summer, to enjoy unforgettable sunsets. The village overlooks the Vallone Porto, protected oasis from the WWF, which preserves thanks to the special climate and his protector (Gianni Menichetti) species of animals and rare plants. Nocelle is the starting or finishing point for hikers who walk the paths of Lattari, first of all, for those who want to visit the Path of the Gods, and maybe want to experience the thrill of reaching Positano center along the 1,700 steps leading to Arienzo.

Monuments and places of interest:

Church Santa Maria Assunta (Spiaggia Grande) was founded as a Benedictine monastery in the second half of the tenth century and which decays slowly until in 1777, when it completed the renovations that made him very similar to today. Of particular interest is the Byzantine icon of Our Lady, also known as the Black Madonna, which dates back to the twelfth century.

Beautiful and well-known the Path of the Gods, which starts from Agerola to reach Nocelle that with a walk of about two hours allows you to see unspoilt views that gaze reach Capri. Just as nice to walk on the street entitled to Positanesi of America from Grande Beach it leads to the beach Fornillo. Visit the natural stone arch of Montepertuso.

A hike along the coast and towards Amalfi, Capri, is a must. The sea area around Positano is practically almost all the protected oasis. A visit and a dip archipelago of “Li Galli”, mythologically known as “Island of the Sirens”, is 2 miles from the coast. Besides the incredible importance to the island’s quotes in the Odyssey of Homer tells of Odysseus who gets tied to a pole to listen to the siren song, was the home of two important personalities of the world of the dance world: the choreographer Léonide Massine and the Russian dancer Rudolf Nureyev, who with his presence gave inspiration to the creation of “Positano Premia La Danza”, an International Gala which takes place in the first week of September and that rewards the world’s best dancers of the year. 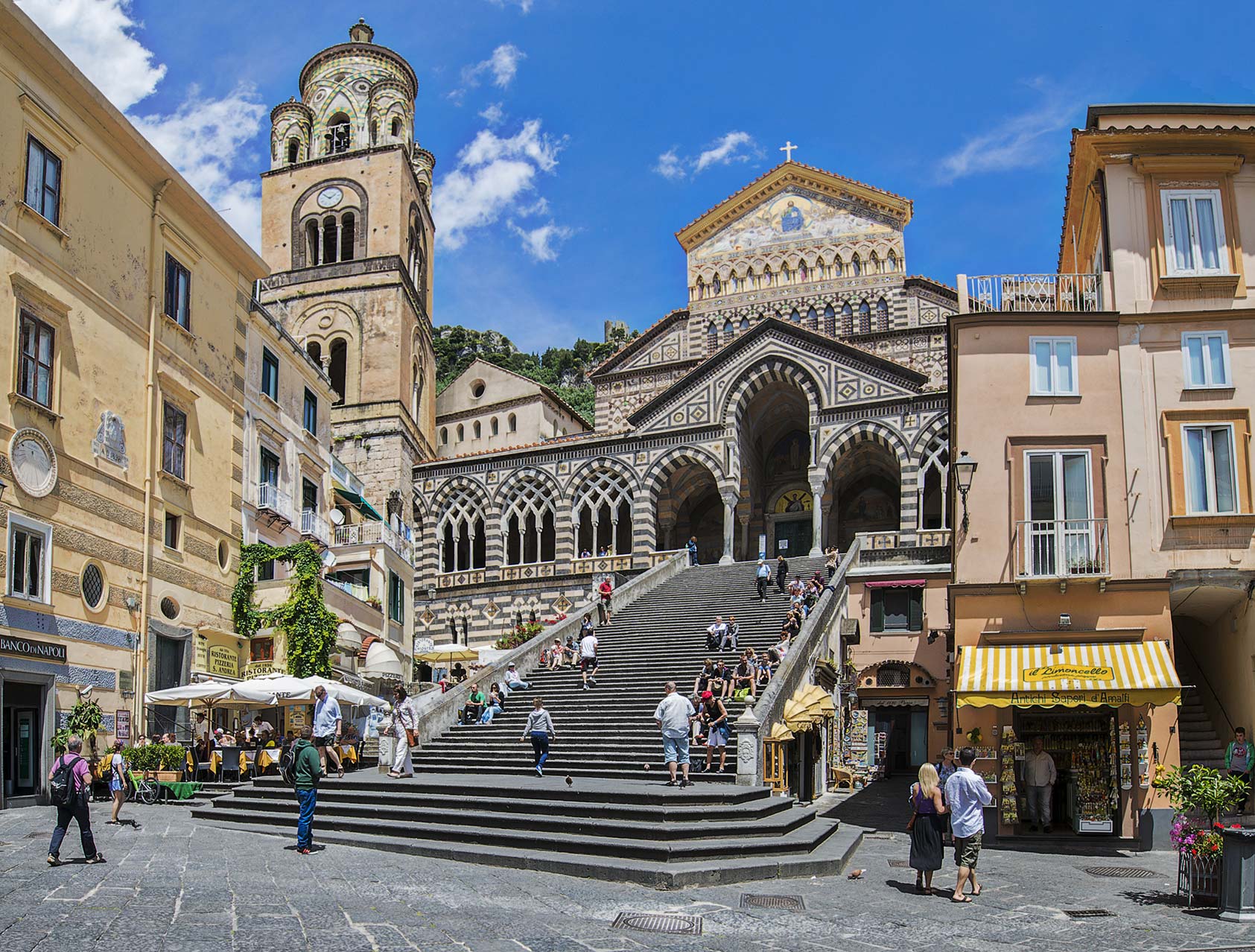 The most historically important cities which gives its name to the whole coastline. Its importance is related to the “Duchy of Amalfi”, a relatively large territory and influential that in the year 1000 gave way to the Maritime Republics, with Pisa, Venice and Genoa. Among the main things to visit, even just for a day trip, they are certainly:

The Cathedral, dedicated to St. Andrea, with its melted door to Constantinople and the statues on the main altar of Bernini, the “Paradise Cloister” with the Arsenals and the Paper Museum.

Along the road to Amalfi, and precisely in Conca dei Marini, do not miss the visit to the Emerald Cave, a very fantastic place.

Considered “City of Music” for the important festival dedicated to Richard Wagner, who was pleased by visiting the gardens of Villa Rufolo, to find a place that until then had existed only in his imagination, and he perfectly described componendone text and the music in his last work, namely the magician Klingsor’s garden, and he wrote in the visitors book: “we found the garden of Klingsor”, not because they wanted or sought some reason for inspiration, but giving, in his self-centeredness brilliant, something he imagined existed already.

Villa Rufolo: set of buildings dating from the eighteenth and nineteenth centuries, with Islamic influences. It also contains an archaeological Antiquarium.

Villa Episcopio: ancient property of the bishopric Duke of Sangro, stayed there the King Vittorio Emanuele III during the spring of 1944, when the government of Italy was established in Salerno. In it there was the signing of the governorship in favor of Umberto II.

Coral “Camo” Museum: of considerable charm of the eighteenth century a snuffbox encrusted with cameos.

Cathedral of Ravello: dating back to the eleventh century. In the seventeenth-century chapel is kept the vial of blood of the patron saint Pantaleone, which like San Gennaro, which presents the annual phenomenon of liquefaction. Note a mosaic-shaped Pistrice, sea monster mythology, also present on the church bell tower of Santa Maria Assunta of Positano.

We use cookies to improve the browsing experience of users and to gather information on the use of the site. If you want to know more then consult our privacy policy.AcceptNoPrivacy policy
Revoke cookies